“I feel emotional when I hear the Ngäbe people talk. I feel their purpose. LEAF is  helping indigenous people fight for a good cause.”  -Jose Mendez, Trip Guide & Founder of Passport Adventure

This trip brought a long time LEAF couple closer to the global community while supporting the  preservation efforts of indigenous culture keepers from First Nations throughout the region. The  opportunity to spend time & build meaningful relationships with families among the sacred communities  of Costa Rica is a life-time experience. While witnessing the powerful expression of culture within these  communities, trip participants were fully immersed in dynamic spaces of ceremonial practices, traditional  medicinal customs & language recovery. The true beauty of the LEAF International programs was  displayed in action, felt deep in the heart, and defined the importance of cultural preservation.

LEAF International supports 3 programs in Costa Rica: 1) Bribri First Nation near the Caribbean and  southern side of the country in Amubri, 2) Ngäbe-Buglé First Nation in La Casona, and 3) Cabécar First  Nation in Ujarras & Chirripo. Each program empowers local culture keepers to preserve their sacred  traditions, customs, land and language in their community.

“I can never travel as a tourist again after this trip. We can’t believe the work that is  happening here; Everything was spectacular & the connection  with the community is the reward.” – Barbara, LEAF Expeditioner 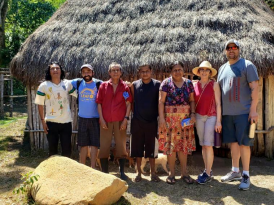 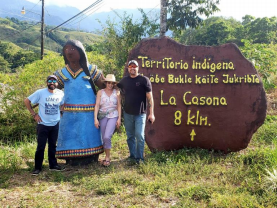 Cultural Expedition at a Glance:

• 1-2nd: Sikwa means ‘outsiders’ in the Bri Bri First Nation language. Sikwa is also a restaurant in San  Jose that sources all of its food from indigenous communities & farmers. Every recipe is a product of research from indigenous communities. Sikwa opened in 2017 and has been serving up traditional goodness ever since. For example, we were served Stone soup, a dish from northern Costa Rica. This soup is traditionally served 2 times a year & only man can make it. Each tribe has a  dish that supports the security of the community and the nature of the Earth. Restaurant owner,  Diego, was extraordinary with his service, love and knowledge.

• A few other delicious delicacies served were: Chicha – a fermented drink made with sugar cane, ginger, & purple

corn, Naranjilla – a delicious fresh fruit used as a juice made from the indigenous Naranjilla plant, as well as a variety of seafood, meat, and pure cocoa desserts.

This visit included a very warm welcome by Pedro – the leader & decision maker over the community. Pedro holds the highest respect & responsibility for Ngäbe people.

We embraced many important aspects of the Ngäbe culture and their sustainability methods: 1) Took a  traditional Ngäbe language class which included learning common greetings like hello, good morning, and how are you, 2) Learned about a variety of traditional plants and foods that keeps the community fueled.  The community grows everything including fish, escargot, bananas, plantains and mangos, 3) We enjoyed a meal of fresh fish out of cultivated ponds on the comarca with the Chief elder of the community.

• 5-6th: Culture Keeper Alexis Rodriguez is a teacher of the Ngäbe culture at several schools in La  Casona including San Francisco, La Mellizas, La Lucha, & San Miguel (the only school that has all of its signage translated in both languages – Spanish & Ngabe). He focuses on teaching the grammar/writing of the language with a total of 147 youth. Visiting each school was a spectacular experience. The teachers & principals were enthusiastic, outgoing, & determined to give the best quality education to youth under their guidance.

Fun Fact: “The Ngäbe language (pronounced Ngobe by Spanish speakers) – also known as Guaymí – is  an Amerindian language of the Chibchana family spoken by the Ngäbe people. There are 133,092  speakers in Panama (Ngäbe-Buglé region) and Costa Rica (province of Puntarenas). The language uses  the Latin or Roman alphabet. The word Guaymí means “those people” and for us the Ngäbe find it  derogatory to refer to them as “those people” in their mother tongue. The word “ngäbe” comes from  the root “ngäbo” = creator, from which the word “ngäbe” = sons of the creator.”

• 7-8th: Ujarras located in the Buenos Aires district of Costa Rica, home to the Cabécar First Nation &  culture keeper Luis Salazar. The Cabécar community is still recovering from the tropical storm of 2016-2017. The storm completely shifted the river patterns which is ultimately affecting community development. The storm brought huge rocks into the river that now outsiders are selling making it difficult for growth within the Cabécar community.

• We took a visit to the newly finished medicine house built by Salazar. The house is called Namasku which translate to the voice of the tiger. The energetic force of the space can be felt upon entering; The scent of burning wood & herbs can be smelt. The wood was cut using only a machete. A variety of woods were used because the focus was access to the most available resources.

In this space, Salazar performed a sacred ceremony blessing all present while clearing the energy and the minds for complete wholeness. The elders of the land joined us to complete the essential force of the ceremony. The Global Engagement Director was given the hair of animal that lives 3 times its life span. The name of the animal could not be shared to anyone, not even her.  This is so she can fully receive the blessing from the Earth of living longer than one anticipates.  • Currently, Salazar teaches a total of 70 kids – 4 of them have been chosen to be shaman.

“The point is to keep the language alive. For when we lose this, we lose everything our  ancestors taught us.” -Luis Salazar, Cabecar Culture Keeper